The Colors of Holi 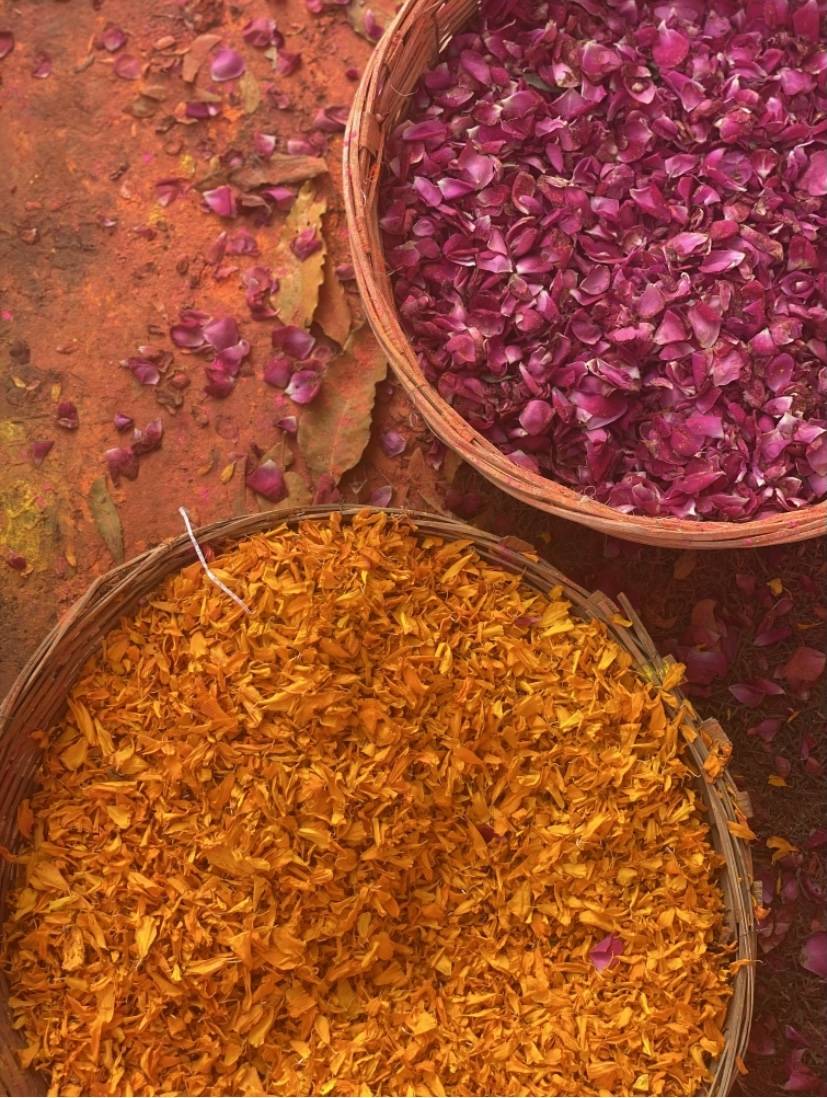 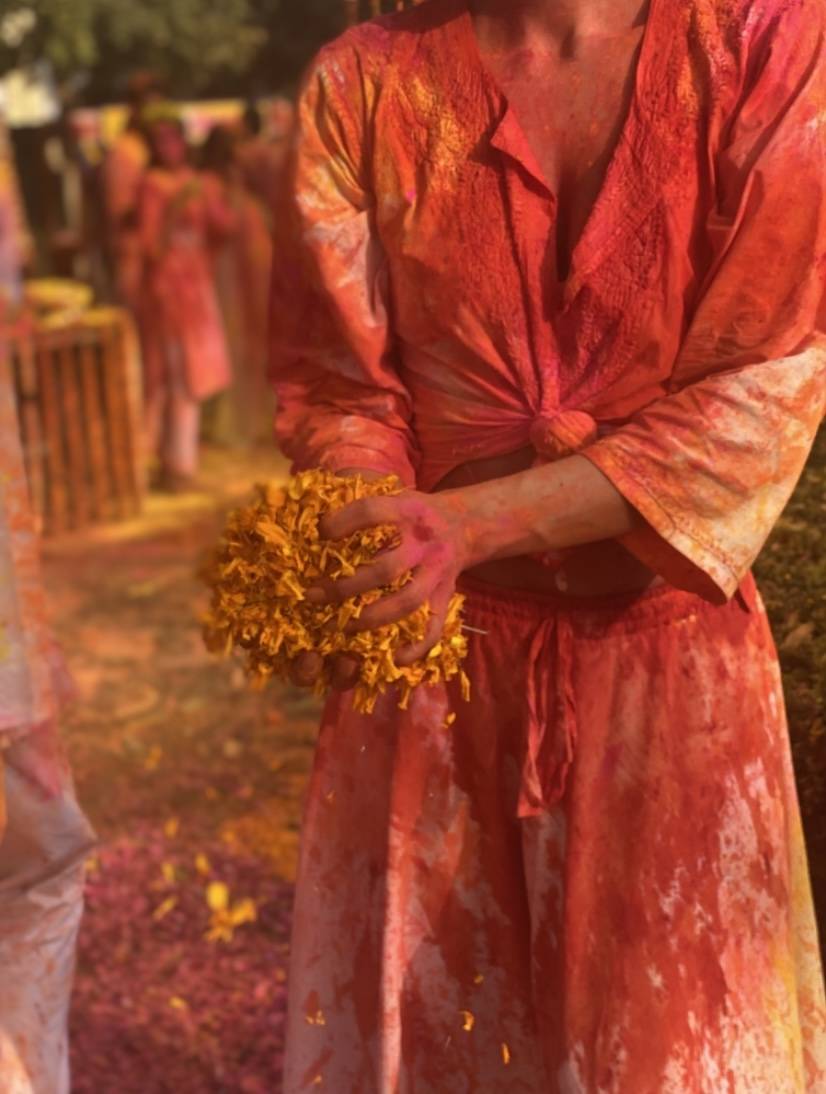 If you've ever seen people celebrating Holi, you are bound to have witnessed intensely joyful and kaleidoscopically colorful scenes. Alaira Tirtha Shetty explains the origins of the most colorful festival in the Hindu calendar, and shares the cultural and spirital significance of Holi's 'considered and deliberate' color palette.

When the by lanes of Santiniketan, a languorous town in West Bengal, are lined with the saffron hue of sumptuous palash flowers, a revival of community spirit is imminent with the onset of Spring. The hometown of the first Indian Nobel Laureate, Rabindranath Tagore, the village’s inhabitants begin to painstakingly soak the flowers (whose hue was compared to the flame of fire by the poet), to form kesari, an orange liquid which will be used as a primary pigment for the upcoming Hindu festival of color, Holi. Commemorating the triumph of good over evil, its symbolism originates from the legend of Prahlada, a devotee of the god Vishnu, who staunchly upheld the values of righteousness and morality to successfully overpower his father, Hiranyakashipu, the demonic king.

The festival’s synonymity with an explosion of color is derived from the love story of Lord Krishna and his consort Radha. According to folklore, Radha was in love with Krishna yet hesitant to pursue a relationship with him owing to his blue complexion. To combat her hesitance, Krishna playfully colored her face to celebrate their love as equal and overcoming all odds. This sentiment of inclusivity and sporting spirit bleeds through the festival where members of the community, regardless of age, gender or caste, unite to express joy and mark the occasion. 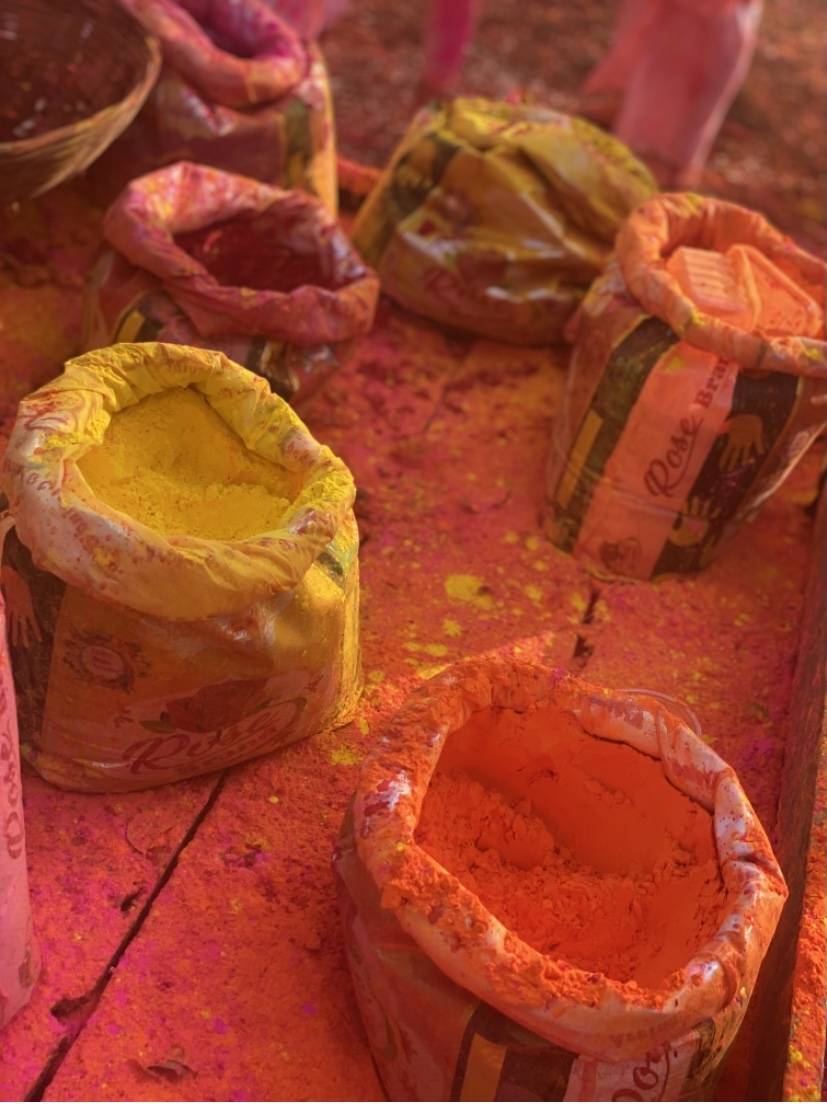 The selection of colors employed in Holi is considered and deliberate, given their historical context and connection to the Seven Chakras. Each specific color ignites a unique effect on the emotional and spiritual flow of energy in the body. For example, indigo is connected to the sixth Ajna (Third Eye) Chakra which deepens intuition and enhances clarity, as well as being the shade of Lord Shiva, the god of destruction but also rebirth.

Orange is also embedded in the festival’s historical roots - the demon Holika (from whom Holi derives its name), was burnt to death and thus the hue of fire signifies purity. Orange is adorned by Indian saints and signifies the rising of a sun, which complements the symbolism of Holi: a new beginning. Orange is associated with the Swadhistana (Sacral) chakra that's connected to the lymphatic system and reproductive organs, thus yielding influence over sexuality and creativity. Green, derived from henna, is connected to the Anahata (heart) chakra, strengthening love and relationships. It has religious connotations of survival and courage as Prince Rama was banished to the forest in the Ramayana (an epic Sanskrit poem and one of most important legends of Hinduism).

The more intense hue of red, derived from ground hibiscus flowers and pomegranate, symbolises fertility as newly married brides wear vermilion powder (Kumkum) on their foreheads. Furthermore, this shade connects to the Muladhara (Root) Chakra, which enhances survival capabilities; as it is also the densest chakra, red symbolises an intensified sense of fortitude. Indian yellow, derived from turmeric, is historically associated with the merchant class, according to the Rigveda-a collection of ancient Sanskrit hymns, thus symbolising prosperity. Related to the Manipura (Solar Plexus) chakra, yellow encourages intellectual stimulation with its connection to the adrenal gland, thus igniting productivity and a sense of fire (like the hue itself). 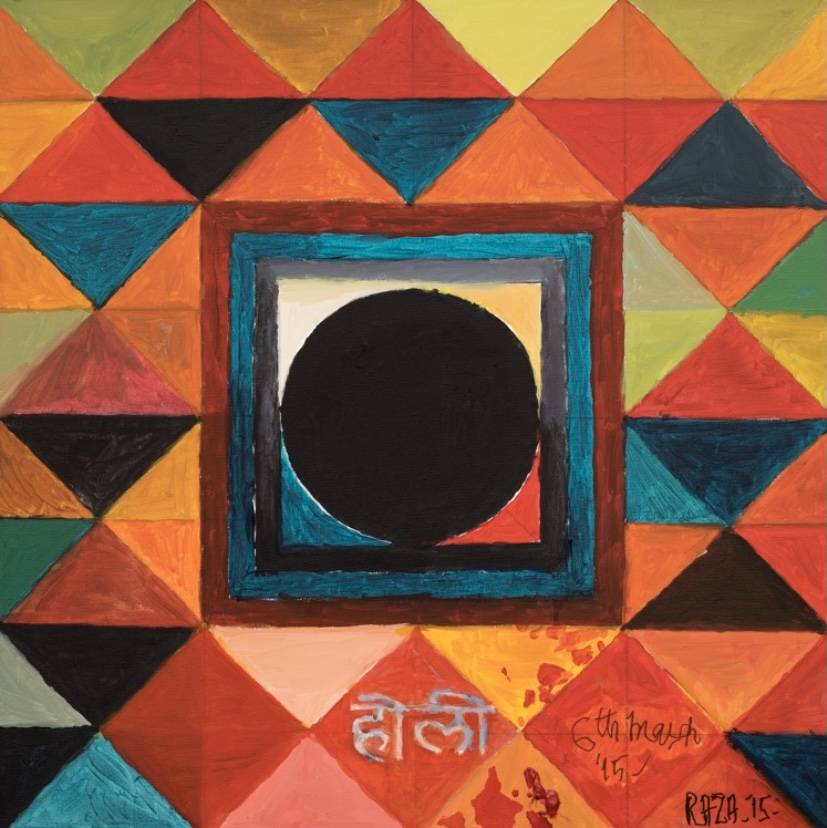 Black is generally avoided during the festival because, according to Varna, the ancient caste system laid bare in the Manusmriti (one of the foremost law books in Hinduism), it represents the lowest social denomination. However, black’s versatility and ambiguity to interpretation may in fact embed it in Holi, if not making it the principal character in the context of color play.

For, according to Brahman, a metaphysical Hindu principle, a single dense locus point holds the diversity of the universe together. In renowned artist SH Raza’s celebrated painting, Holi (2015), pictured above, the orange, green and red geometric lines are centred by a black dot, “Bindu”, a single focal point from which the source of all energy (and thus color associated chakra) emanates.

Therefore, in Holi, color and cosmos share a symbiotic relationship with the concept of energy creation being fluid and everchanging. The limitless possibilities from this black dot mirror the endless combinations of color in play during Holi, where a fistful of fuchsia thrust in the air could meet a bold shade of vermillion, followed by a mellowing meeting with green, before landing on the shoulder of an unassuming reveller. 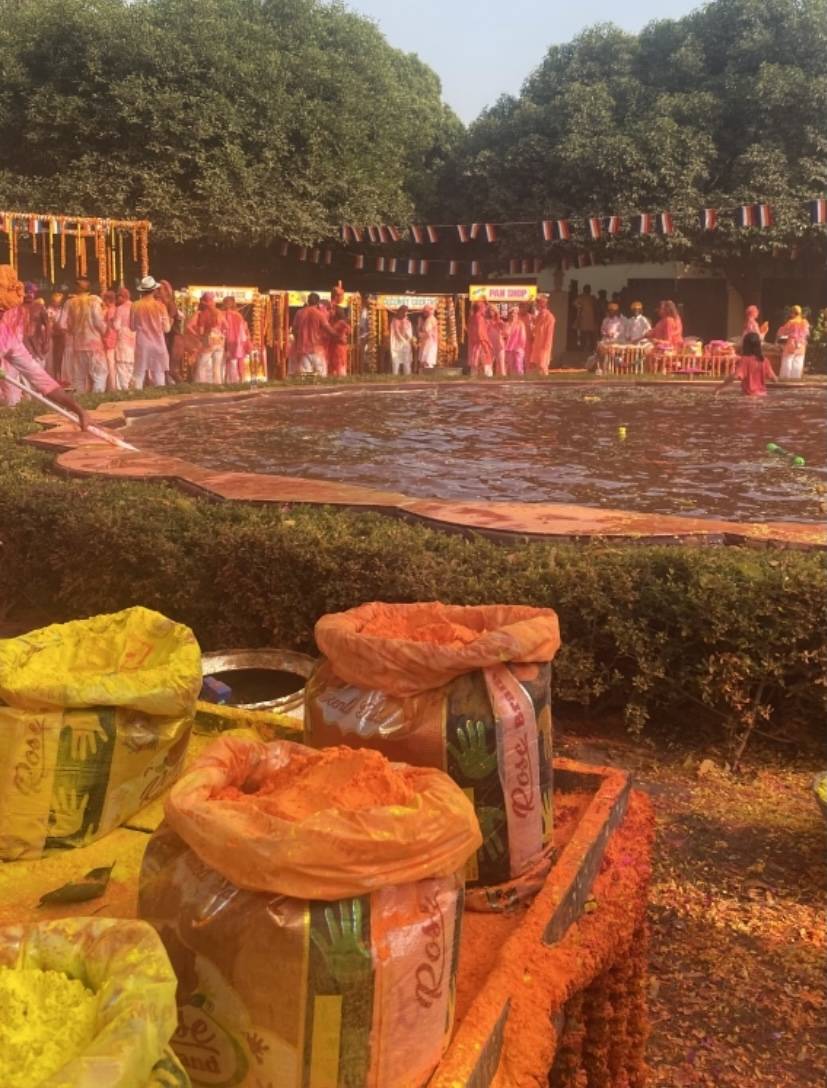 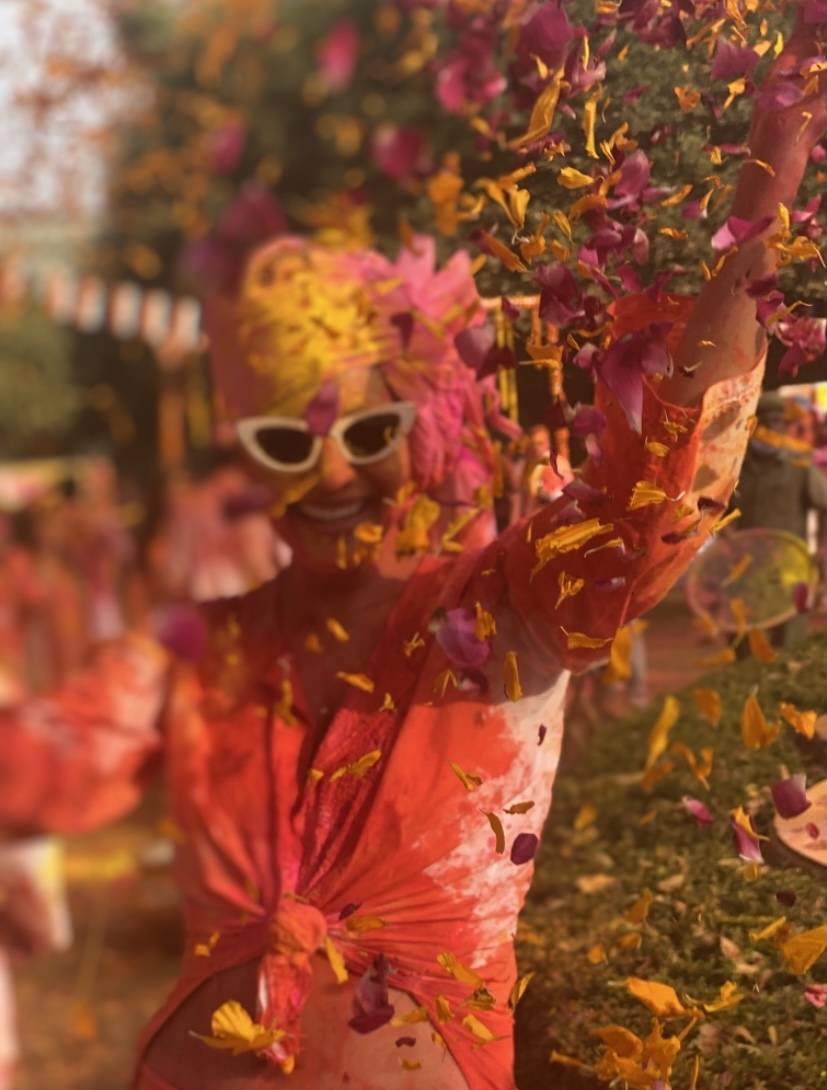 The photographs in this article have been shared by designer, Racil Chalhoub, and show scenes from the annual Holi party hosted by HRH Maharaja Sawai Padmanabh Singh of Jaipur. For Racil, celebrating Holi in Jaipur was an experience "beyond my wildest imagination".

"I never thought that for a moment in time, I could fully disconnect from the world and be immersed in a place that sparks so much joy and positivity," she explains. "The bright colors take over all your senses as you let your guards down, dance, play and laugh like a child. For one weekend, everyone is fair game, you play with strangers, exchange smiles that fill your heart with warmth and so much kindness; you leave your reality behind and celebrate the arrival of spring, the blossoming of love and the magic of this magnificent Indian tradition."