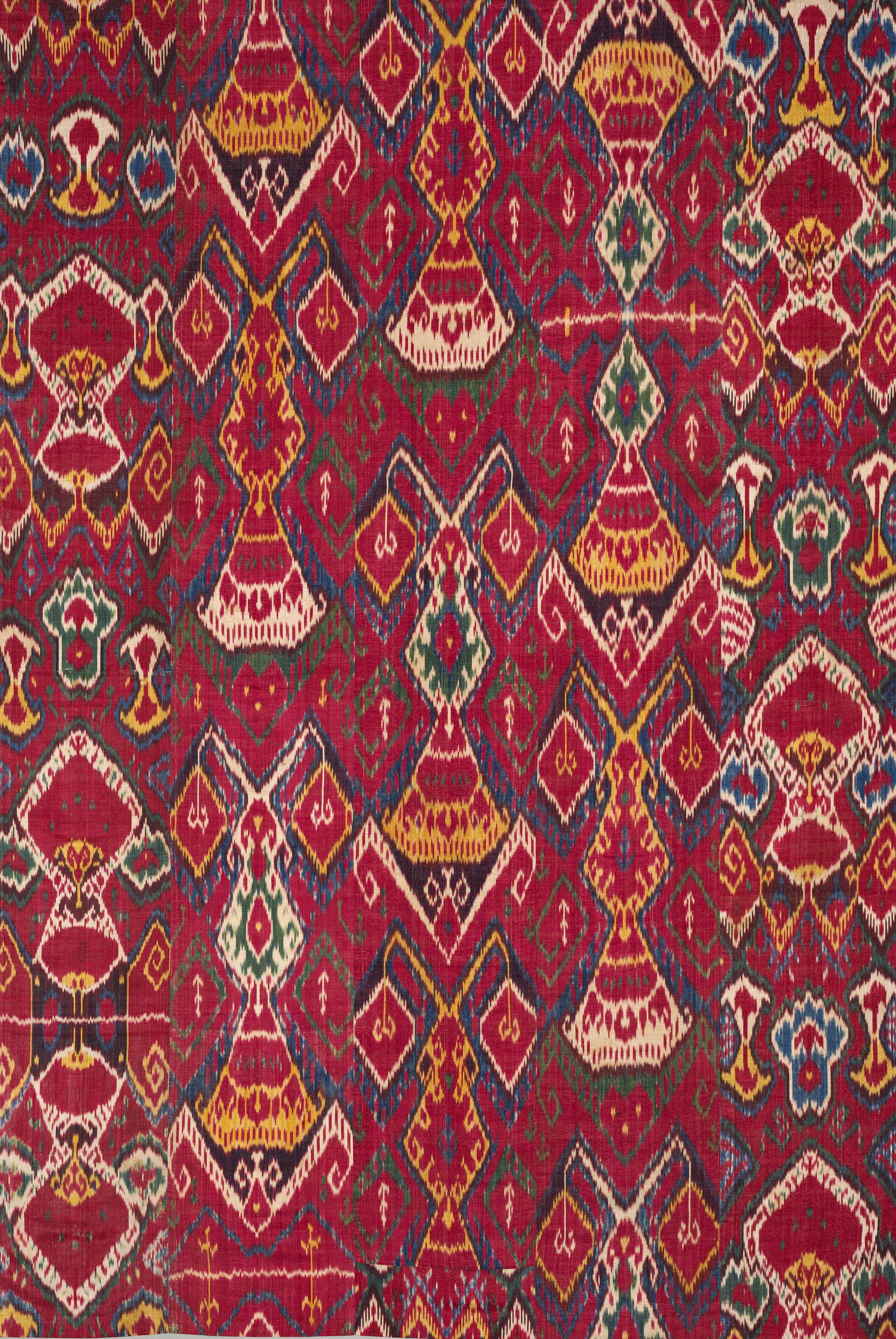 HALI Publications continues its journey through the history of textiles, sharing the unique methods and materials of an enduringly popular design: ikat.

Ikats are among the most recognisable and mesmerising of textiles. The name refers both to the finished product and the process used to make it. A unique dyeing method is key to the beauty of ikat. It is a resist-dye process where the yarns are dyed before the fabric is woven.

Groups of threads are bundled together and those sections which are not to be dyed at each consecutive stage are tightly bound with an impermeable material so that they remain untouched by the colour. In this way, the final pattern is literally dyed onto the individual threads of silk, cotton or wool; a complex, highly-skilled and time-consuming process, particularly when many colours are used.

Binding the threads precisely along the same lines is almost impossible, and often colour seeps at the edges of the bindings. The alignment of the unbound threads on the loom then merges adjacent colours, producing the beautiful, slightly blurred effect so characteristic of these weavings. This can be seen in these 19th-century Uzbek panels, woven from silk and cotton (image above, image below, and background). 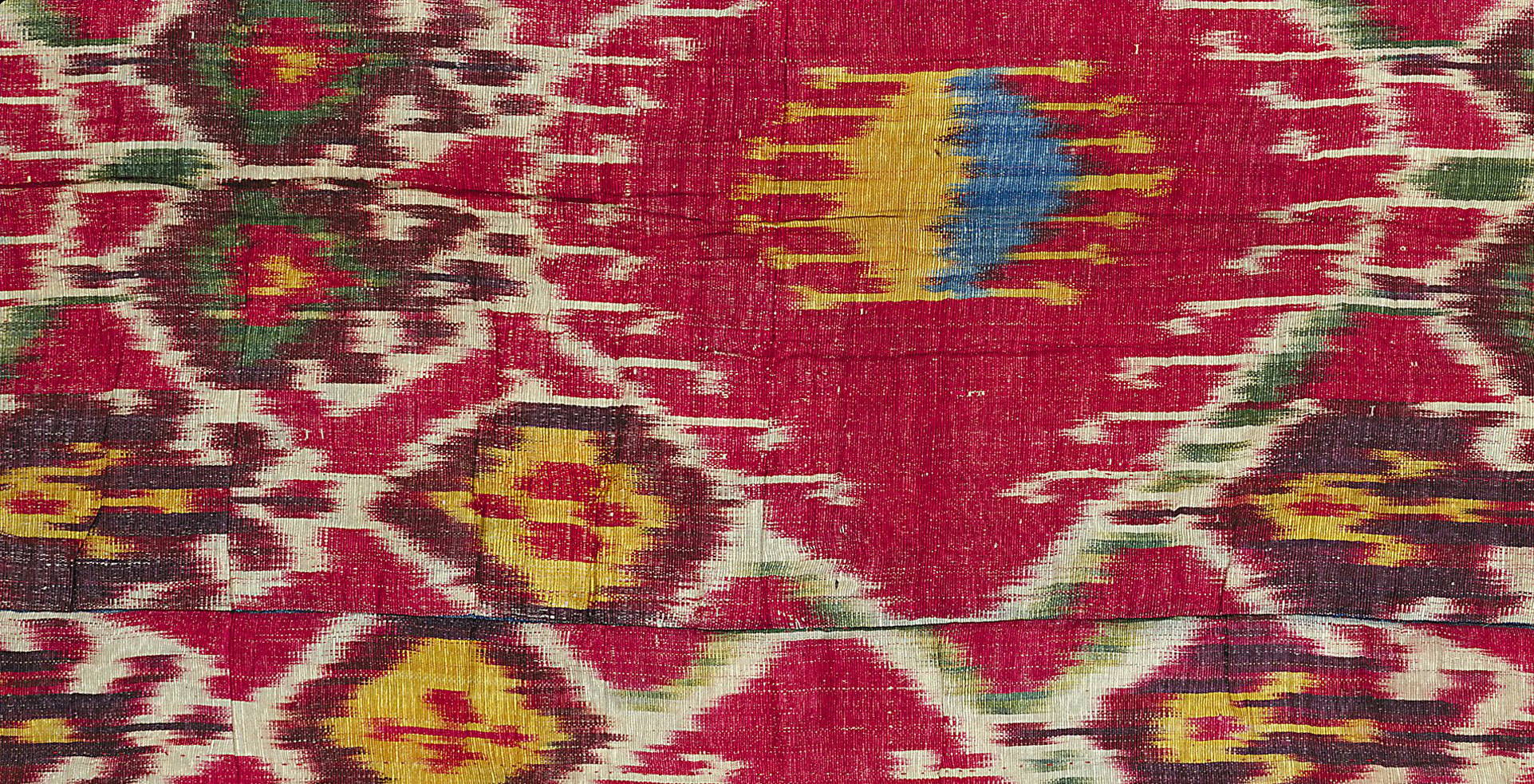 Ikat is woven from a wide variety of materials, and across many geographical regions, including Africa, Europe and the Americas. The best known and most ancient are the sophisticated weavings from Asia—particularly Japan, the Indonesian archipelago, India and Turkestan. This astonishing Indonesian hingii, (man’s mantle, below, left) in warp ikat technique has rows of stags, snakes (naga), roosters, and lobsters within the alternating blue and red horizontal bands and a entral panel inspired by Gujarati patola (double ikat) designs.

Double-ikat means that the design is carried on both the vertical warp and horizontal weft threads. Some of the finest examples are woven in Gujarat in India. There are two types of fine silk Gujarati patola: the majority are patterned with abstracted floral motifs, while those examples decorated with caparisoned elephants, as here (below, right), are altogether rarer. The oldest surviving examples are seldom found in India, but rather in Indonesia, where they were imported for use in ceremonies and thus preserved as sacred heirlooms. 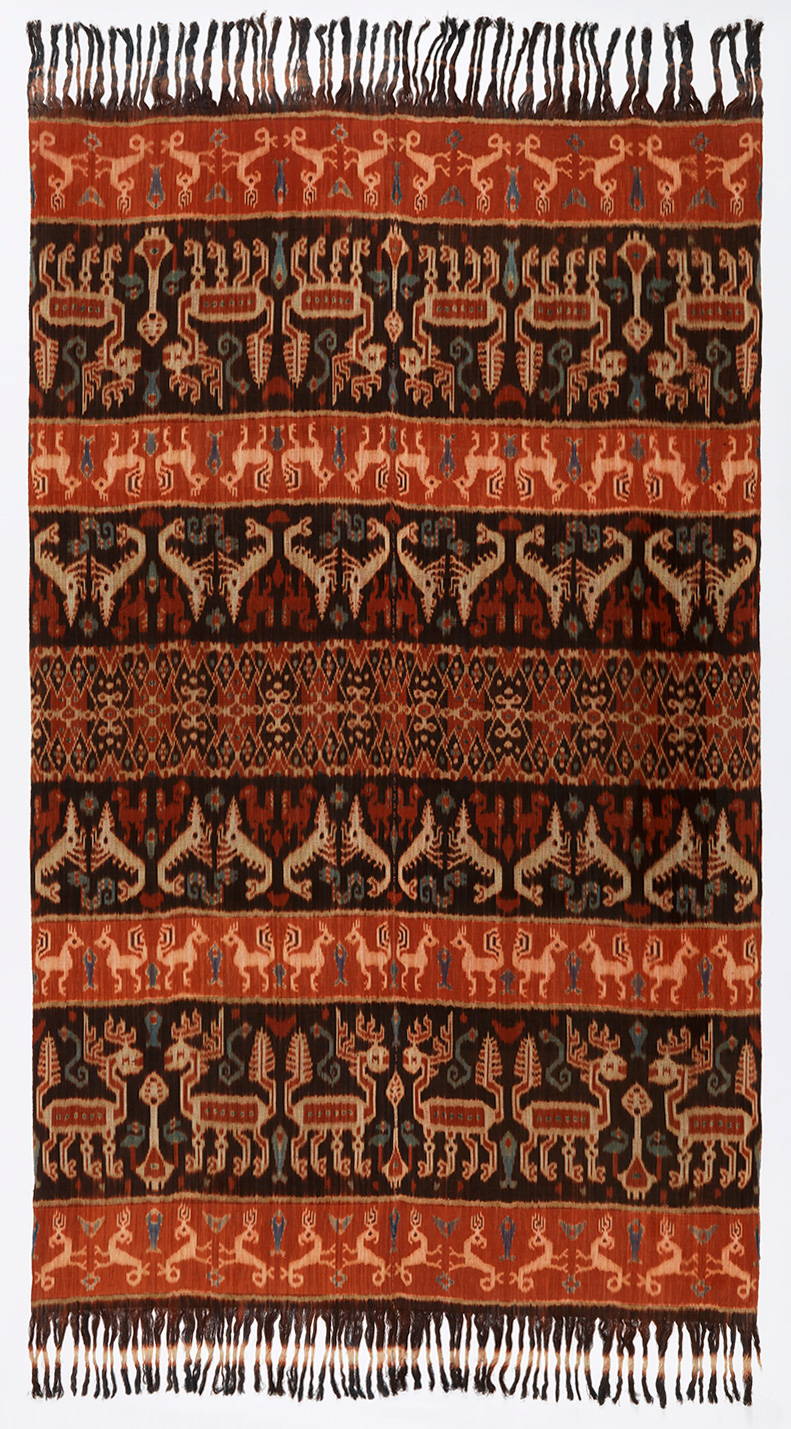 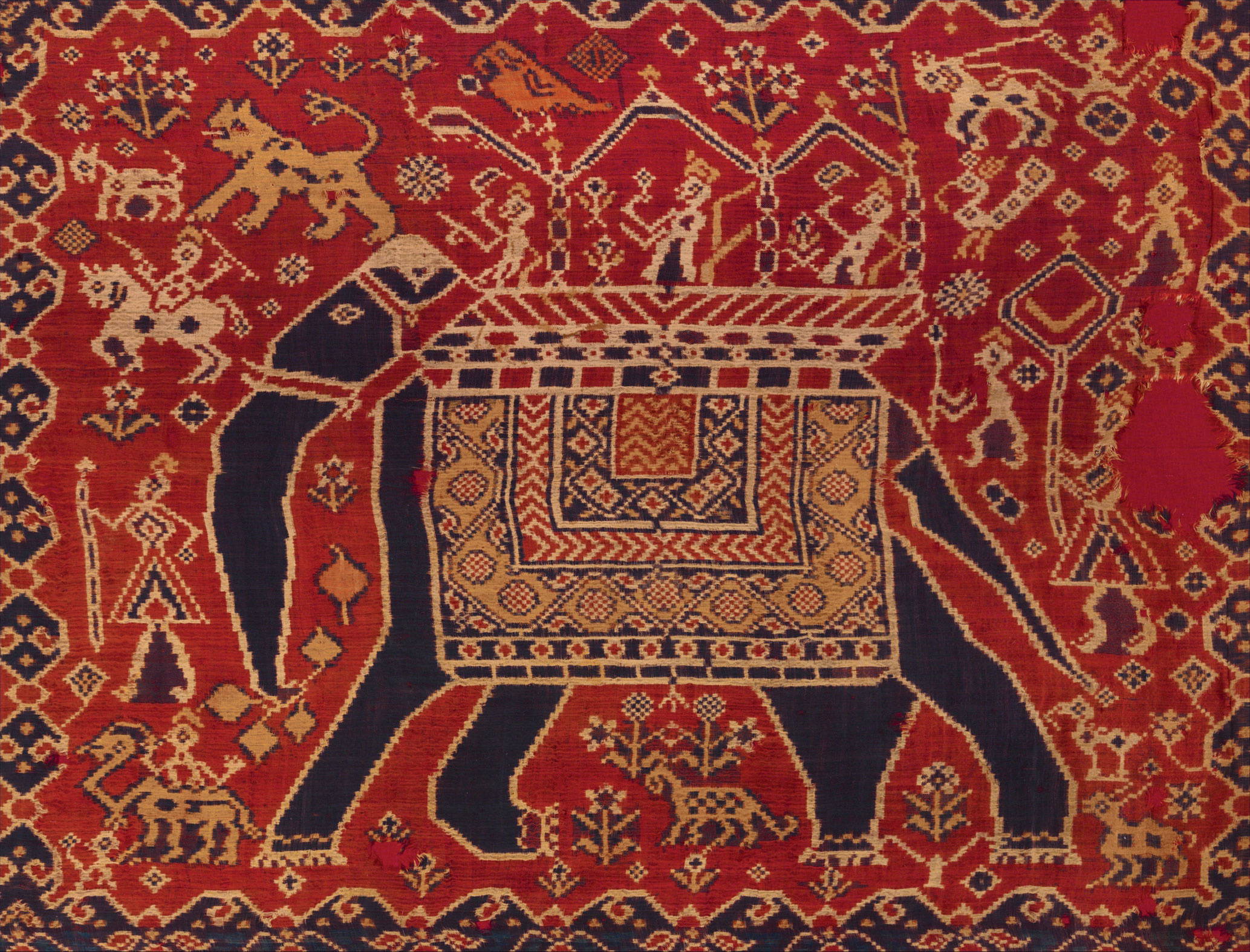 This intricate double-ikat (warp and weft) cloth (below, left), also from Indonesia, was intended for wear as a ritual garment. The mandala forms are recognised by the Hindu weavers of Tenganan in Bali as small house temples and sources of holy water, and are potent reminders of the profound Indian influence in southeast Asian textile art. 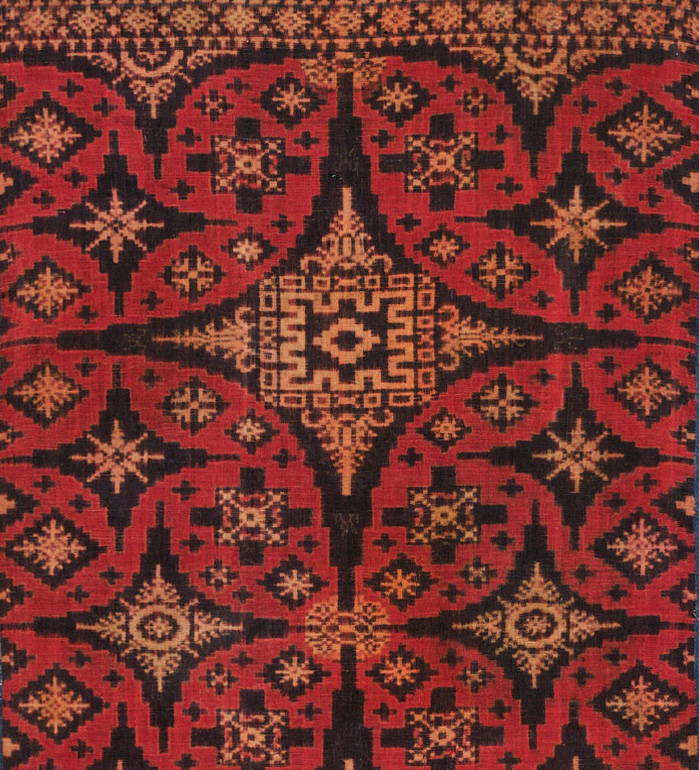 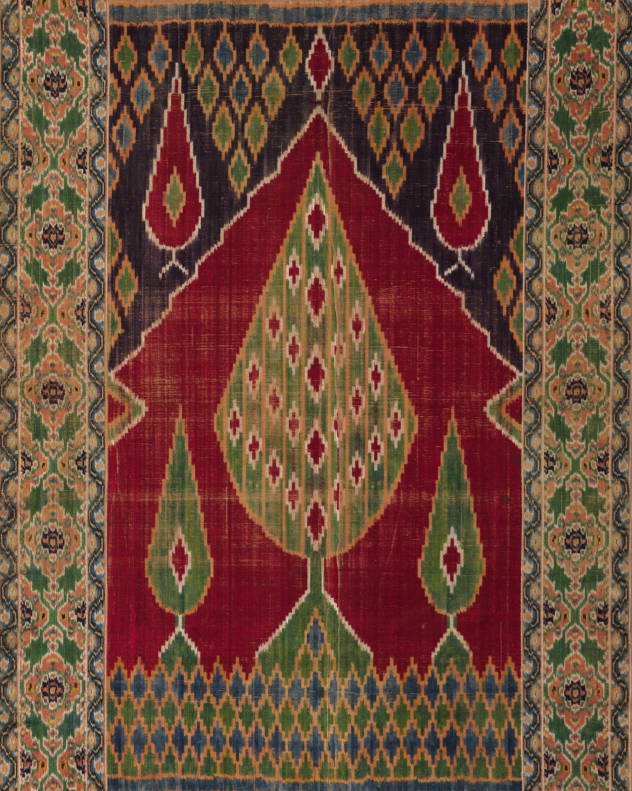 Among the oldest of all ikat technique textiles are Yemeni cotton warp-ikat tiraz with patterns in variegated shades of indigo blue, tan and ivory and embellished with painted or embroidered pious inscriptions (below, left). These were made in workshops in the capital, Sana’ā, during the late 9th and 10th-centuries. Most surviving pieces of Yemeni ikat were recovered archaeological excavations at Fostat in Egypt. The warp ikat technique is called ‘asb in Arabic and was probably introduced to Yeman from India where it existed by the 5th-century.

During the period of Qajar rule in Persia, colourful warp-ikat silk and silk velvet fabrics were used for door curtains (pardeh) and other furnishings, as well as for tailoring into garments. The cypress trees are traditional Persian motifs of great elegance and beauty (above, right). 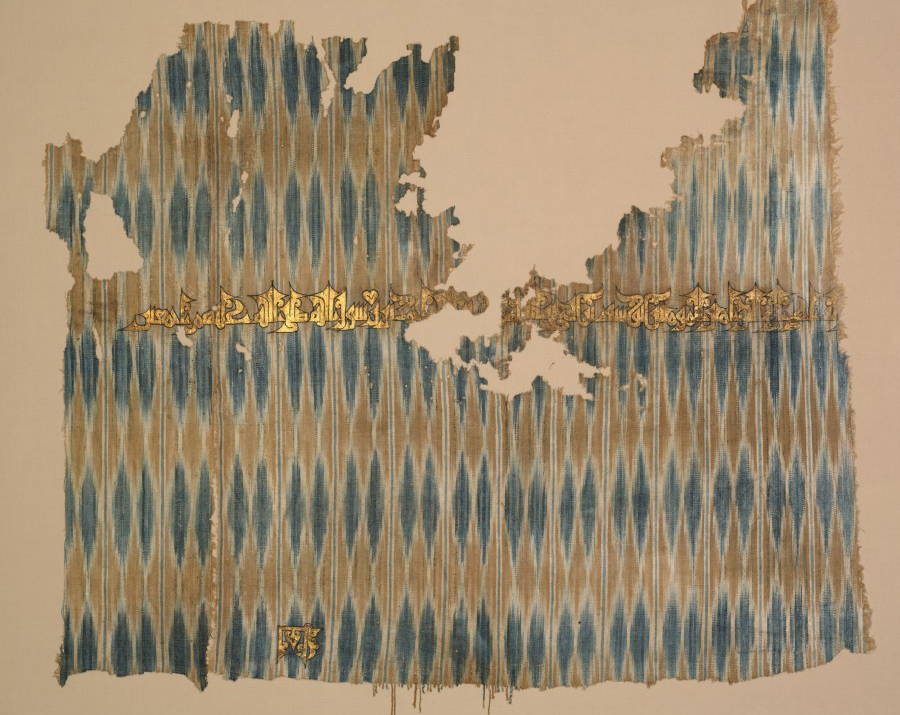 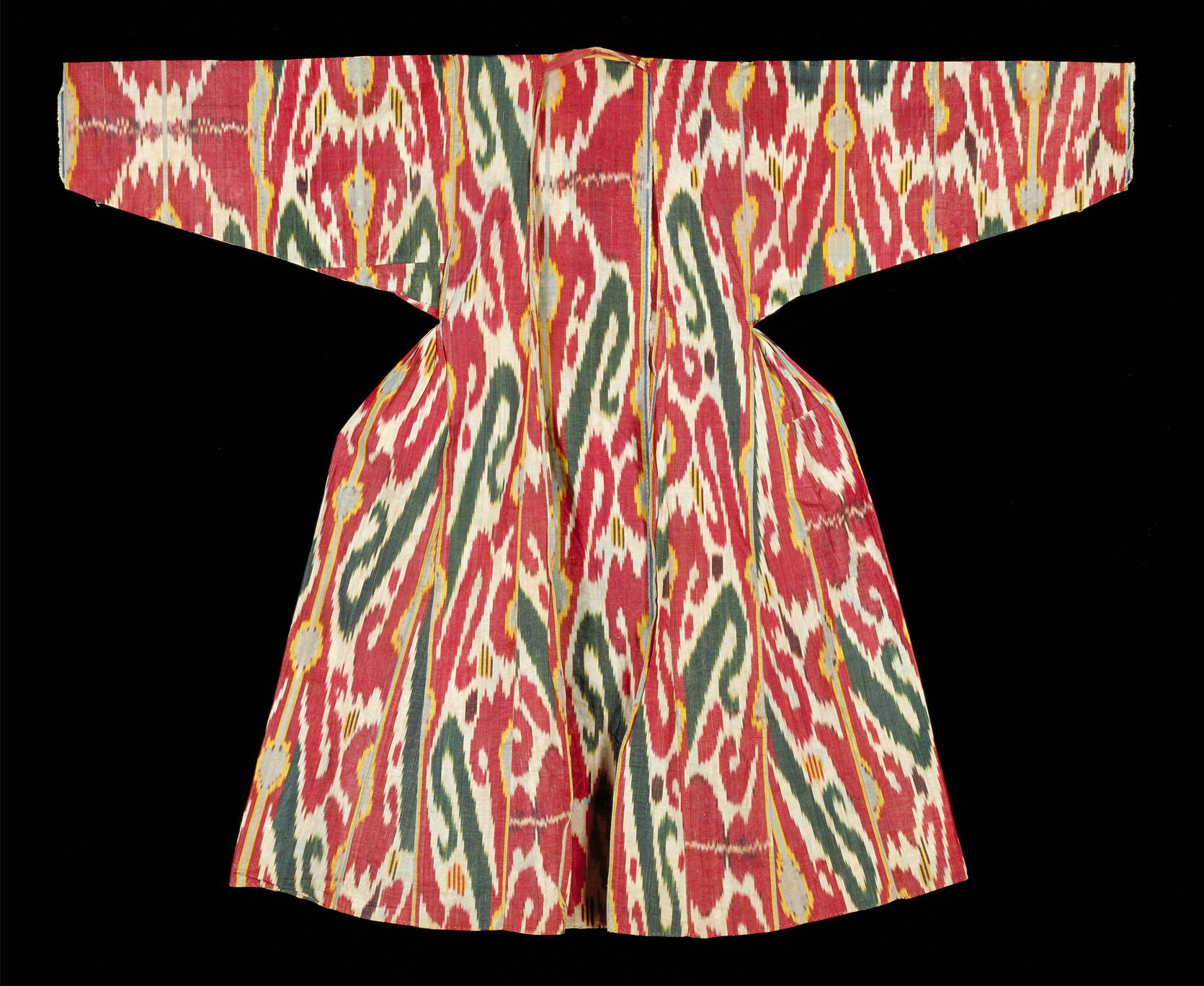 Called abr in Central Asia, ikats, whether all-silk (atlas) or half-silk (adras), are reliably the world’s most brilliantly colourful textiles. Many antique ikats survive as lengths of fabric, intended for tailoring into the colourful robes which were worn by both men and women across Central Asia. This extraordinary 19th century example (above, right) gives an idea of how striking they must have looked, once cut into elegant garments.

Ikats are often vibrantly dyed, and the blurring effect created by the dyeing technique can create beautiful colour combinations. In this silk ikat example (below), a dark blue dye takes on greenish hues used in combination with saffron yellow. 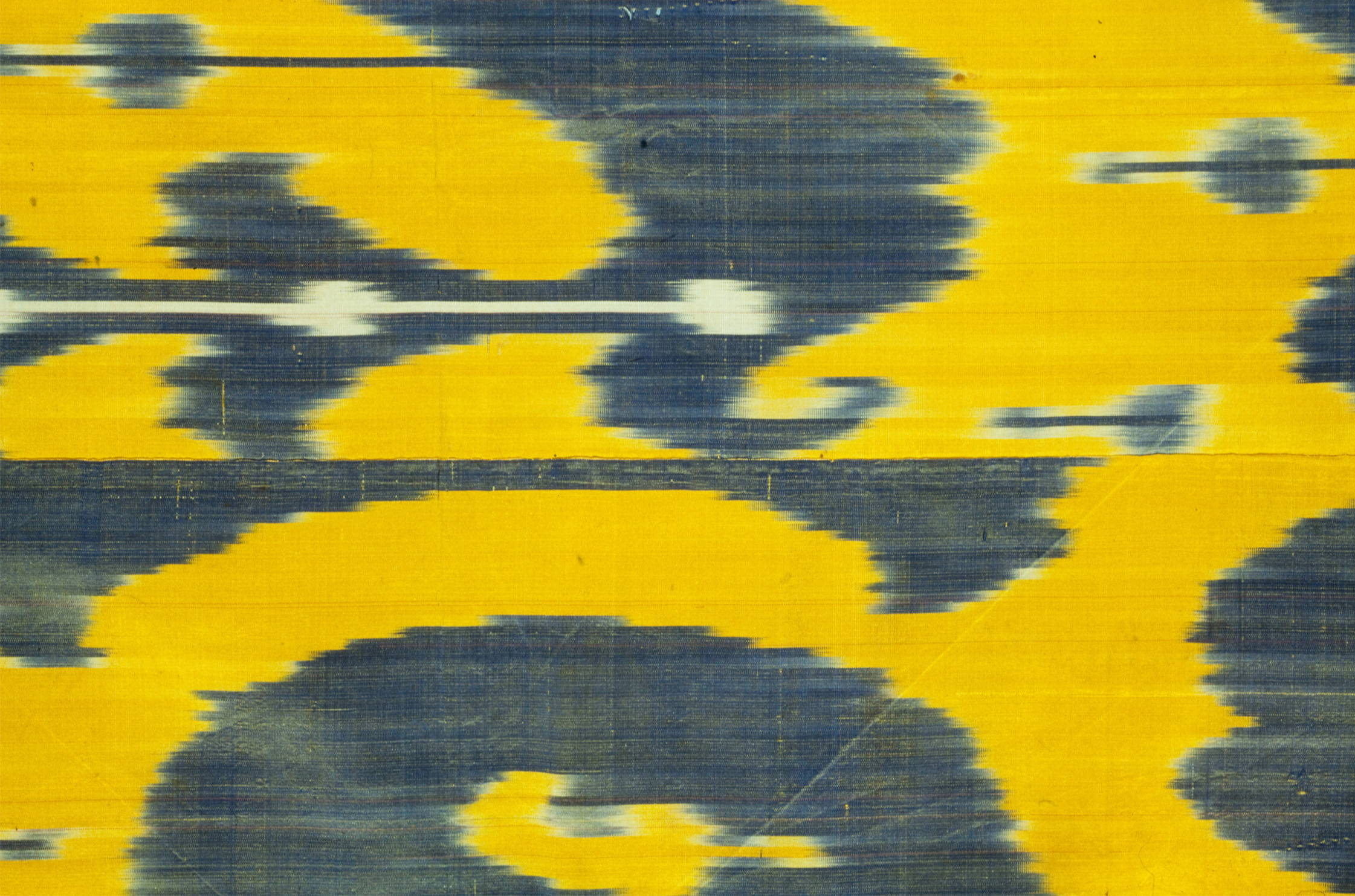 This fine ikat (below, left) patterned woman’s wrapper cloth from the Karun Thakar collection was woven in the small town of Igarra, near the confluence in the Niger and Benue Rivers in central Nigeria. It is woven from hand-spun indigo-dyed cotton. White ikat patterns are the rarest on Igarra cloths, with yellow being most typical. Igarra was one of the few places in Nigeria where ikat dyeing was practised by women weavers, and smaller women’s wrappers are far more frequently seen than the larger cloths worn by men.

Ikats sometimes took on a religious significance. Woven in silk and cotton, this vertically striped fabric is known as mashru (below, right), literally ‘that which is in accordance with Sharia’, the Muslim holy law which disapproves of garments such as pajama made of silk only.

While outwardly opulent, only the more conservative cotton side of the mashru would touch the skin of the devout. Alternating with the red warp-ikat bands with white chevrons are patterned bands in a brocading technique, which contrasts the dark silk warps with the visible white cotton wefts. 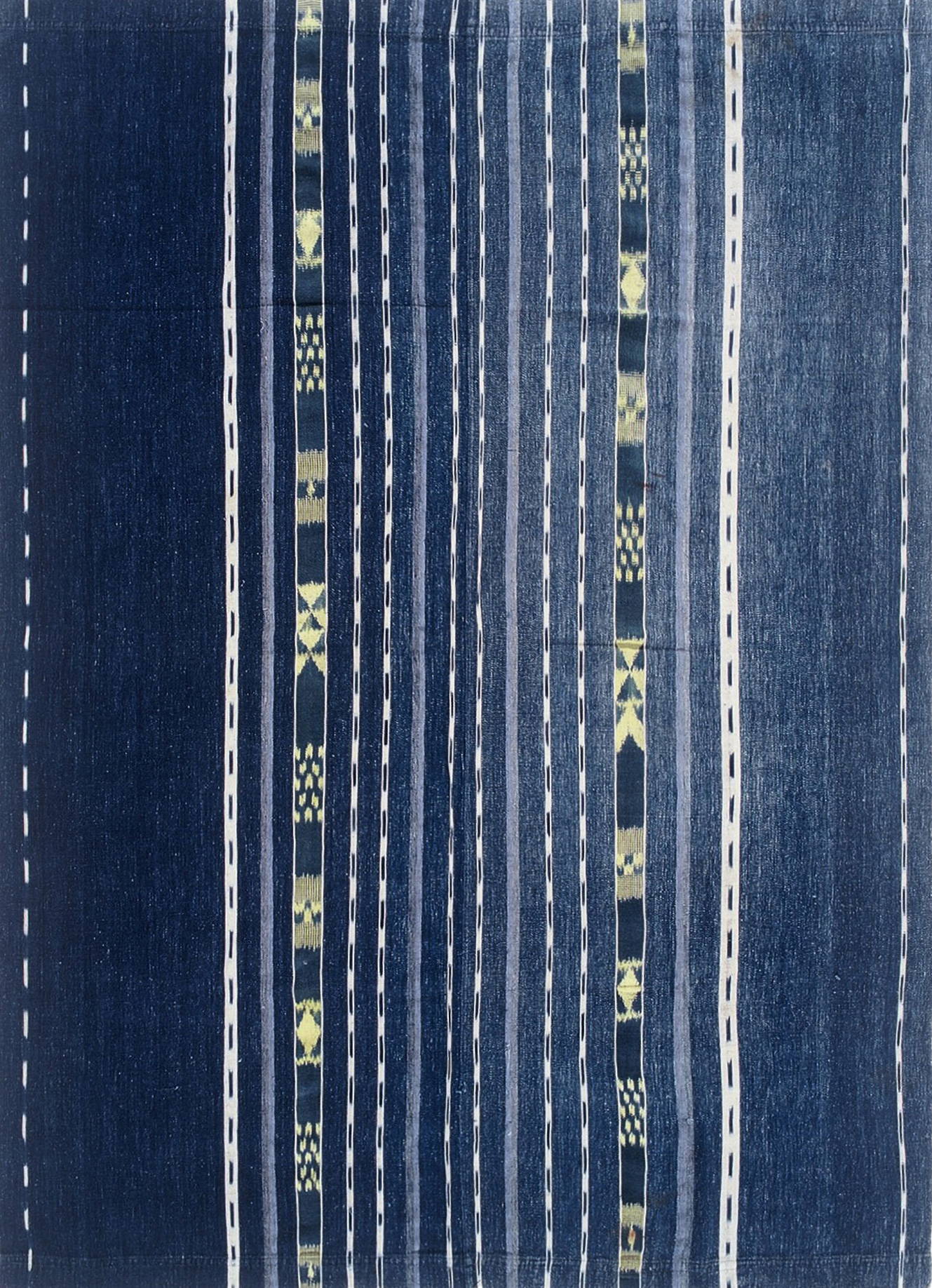 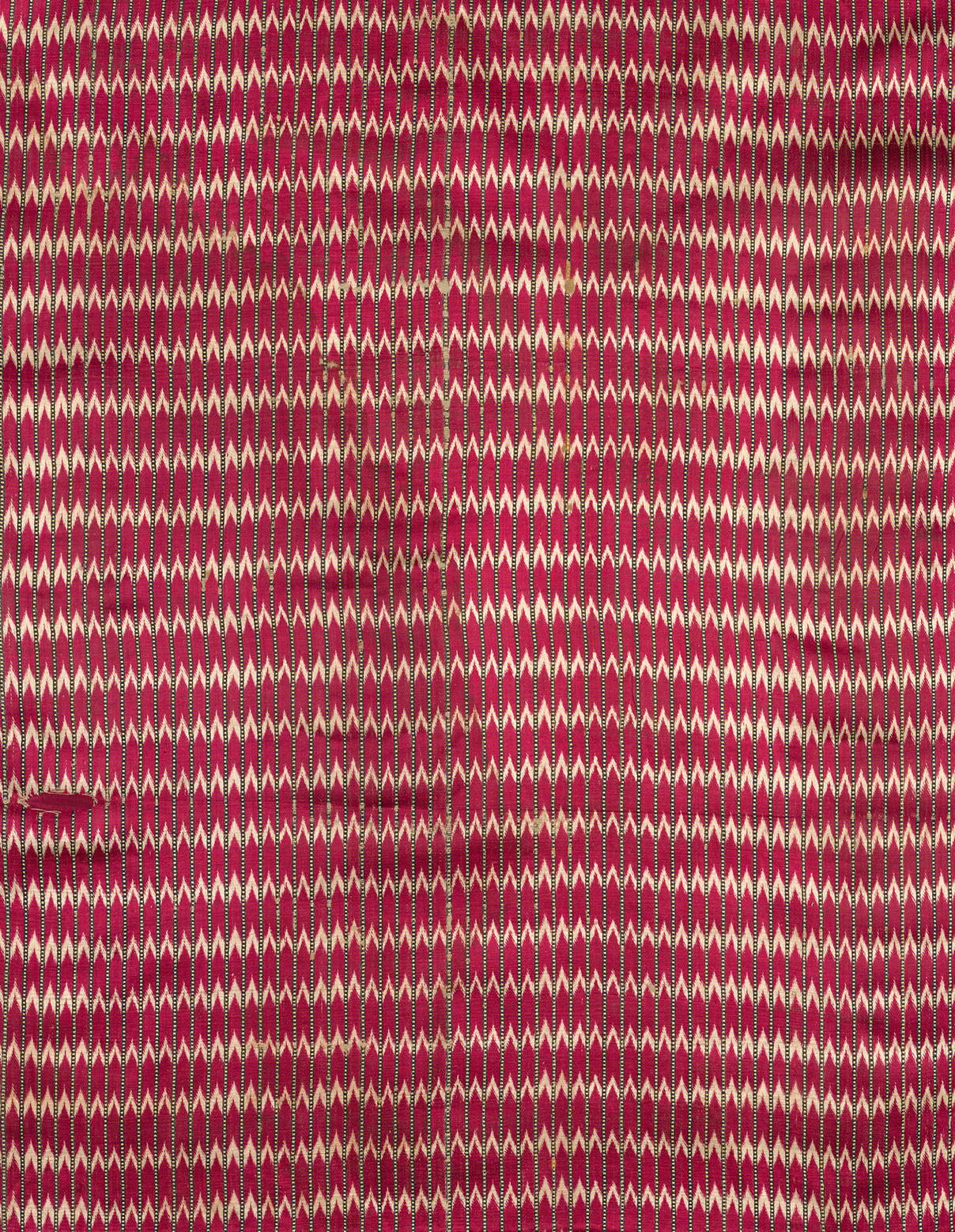 In the western hemisphere, the striking blue and white geometric forms created in warp-ikat technique on the chief's woollen ponchos (trarikanmakun) of the Mapuche tribe from southern Chile proclaimed the identity and status of the wearer (below, left).

Moving with the times, the Japanese city of Kurume became famous in the late 19th and early 20th-centuries for its pictorial double-ikats, known as kurume-gasuri, which often had script conveying nationalistic messages. In this futon cover (below, right) the design includes a steam locomotive and carriages on an elevated track, with telegraph poles and Mount Fuji in the background. 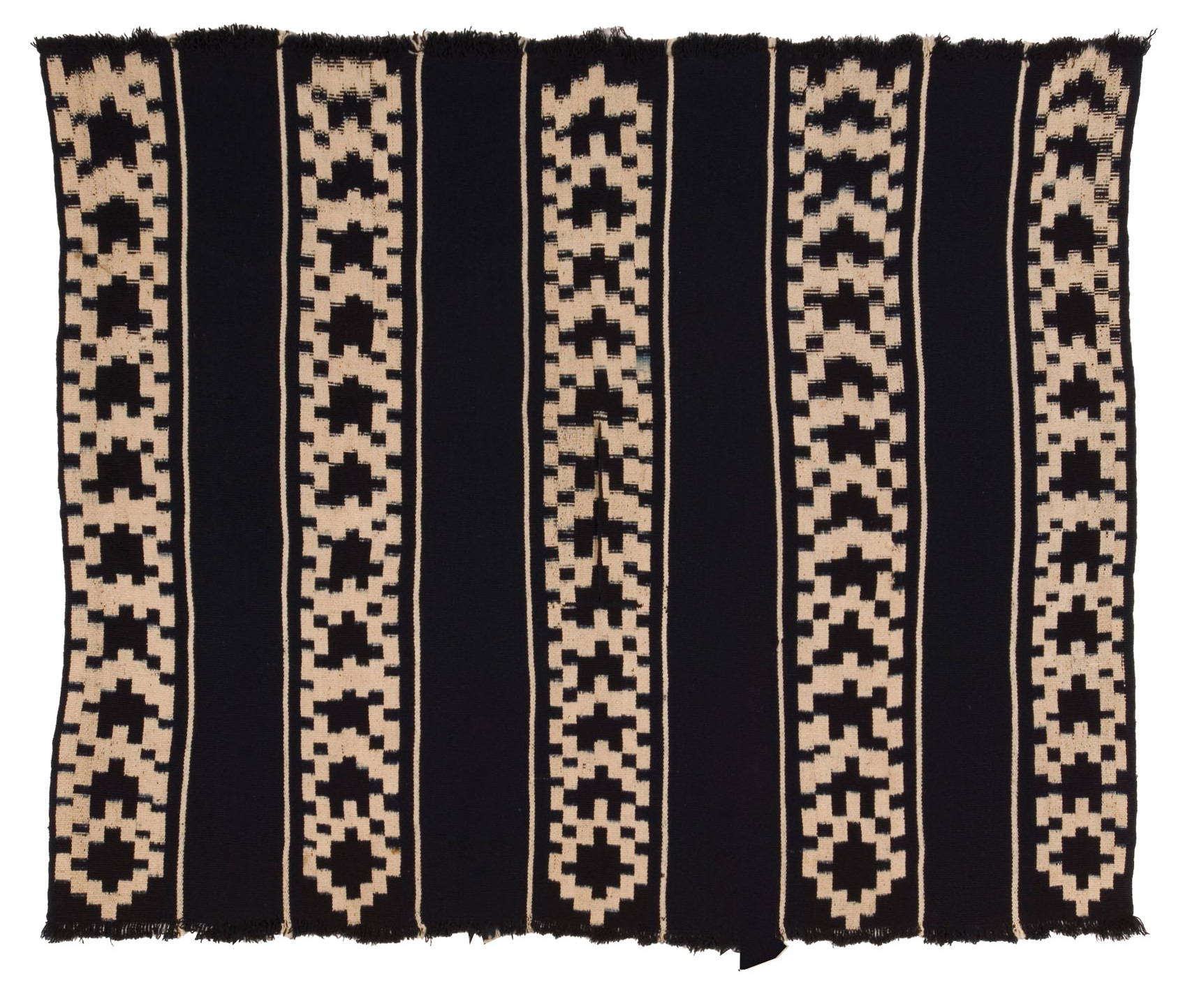 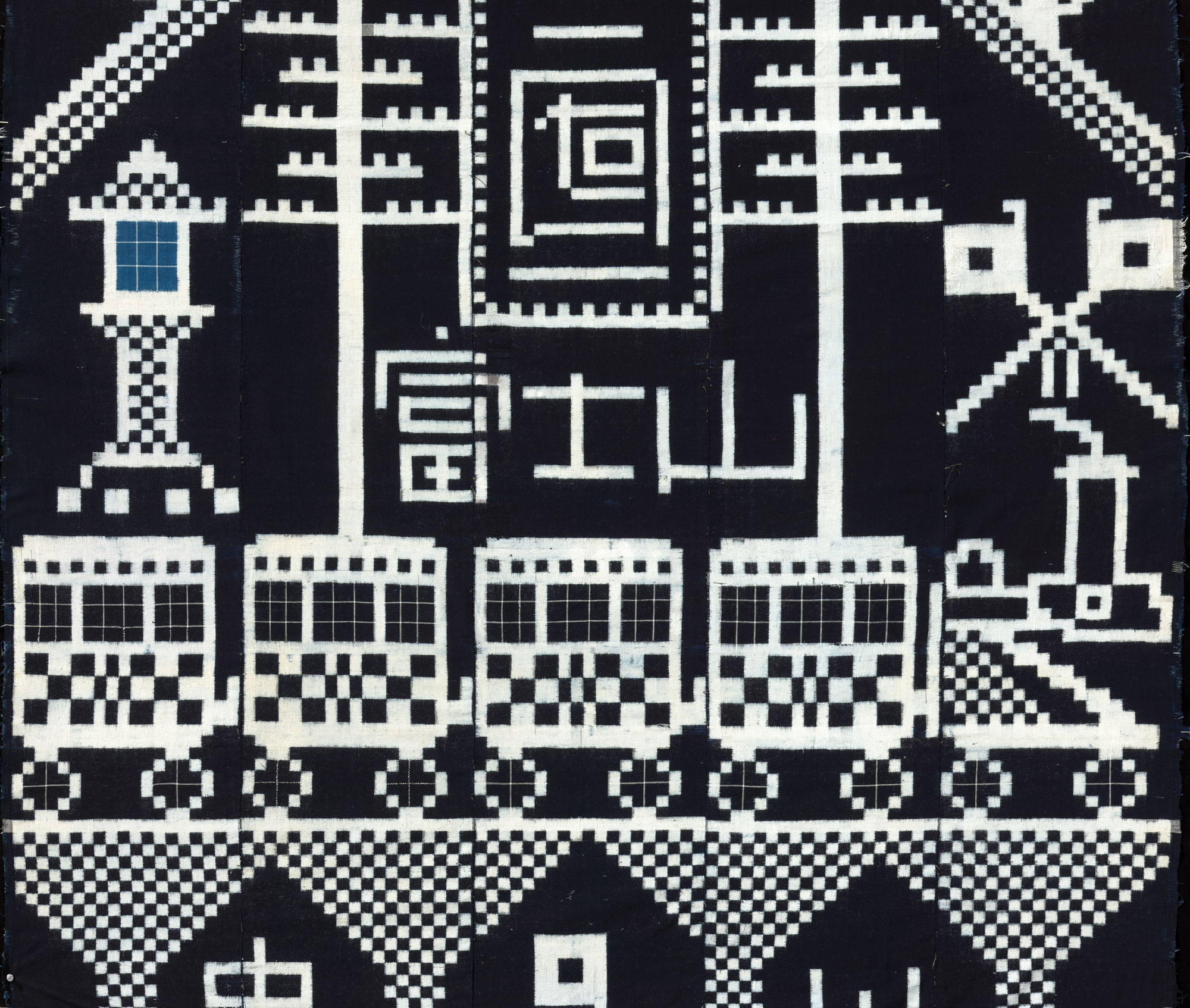