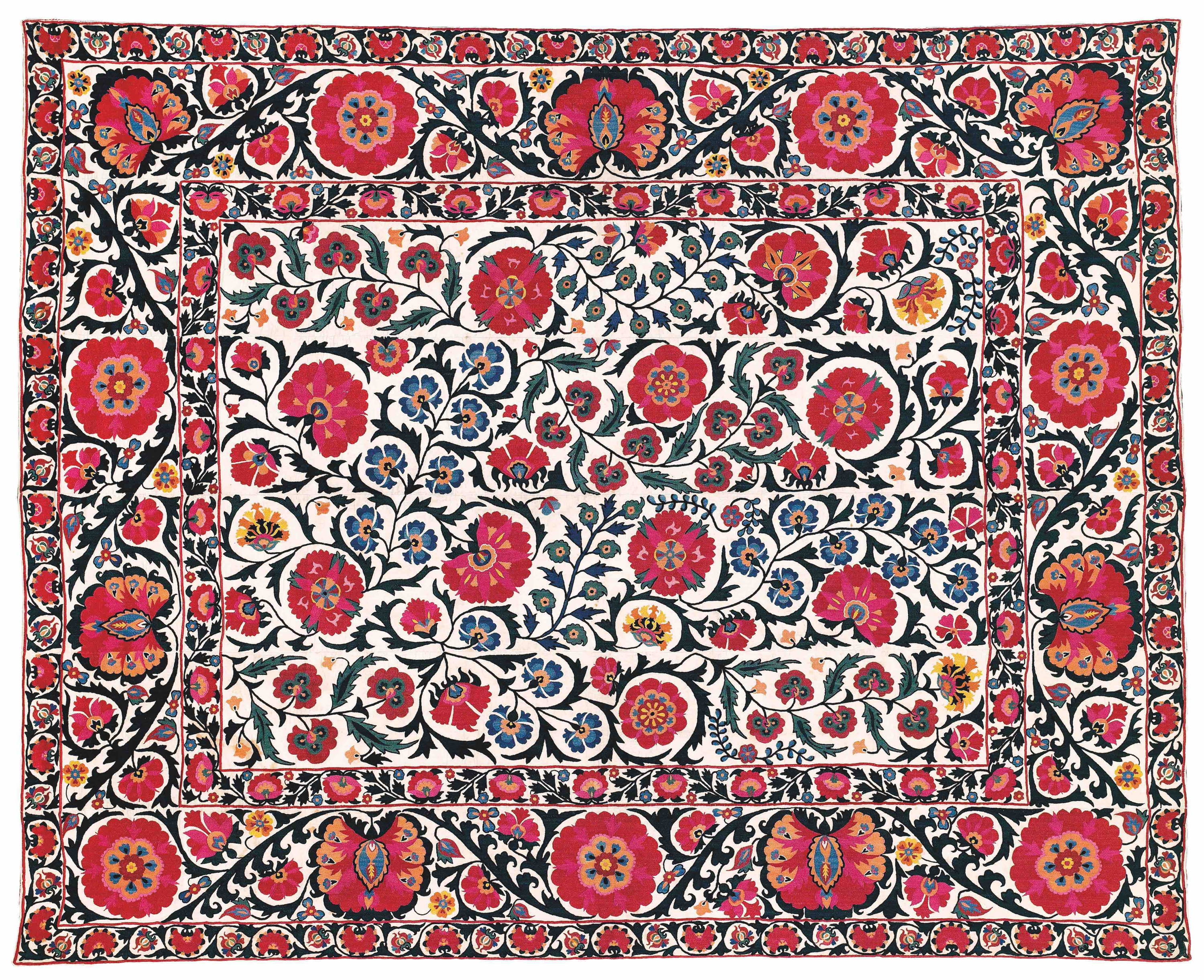 The Editors of HALI Magazine explore the history, symbolism and beauty of Suzani fabrics.

The origins of the Suzani, a vibrant silk embroidered textile panel, can be traced back to 18th century Central Asia. From its origins to the modern day, it has been invariably associated with sentiments of joy, prosperity and conjugal love, remaining a fixed emblem of immense cultural significance for many regions and communities in Central Asia. Arguably these fine and exuberant textiles are the most beautiful expressions of flora and fauna ever made. 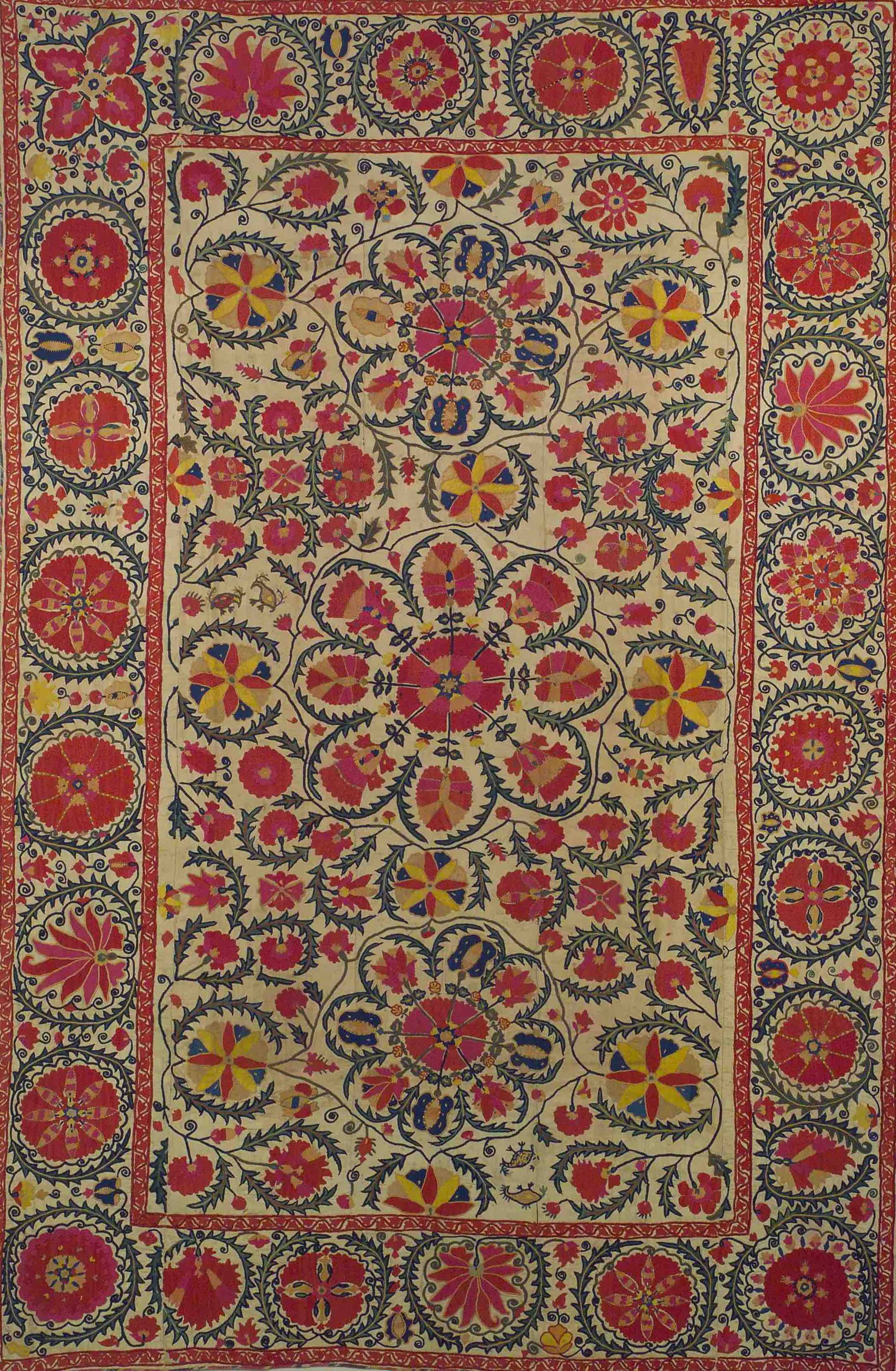 The production of this textile is an exclusively feminine practice, being passed down through generations of mothers and daughters. Historically, women would unite in embroidering a large suzani set for a bride’s dowry, which were then used to decorate the marital home as a representation of the joyous union between two people and a reminder of the prosperity to come. This is reflected in the explosions of colour and various symbolic motifs characterising suzanis, particularly in the allusions to fertility seen in the frequent incorporation of delectable fruits and blooming flowers (demonstrated above and below). 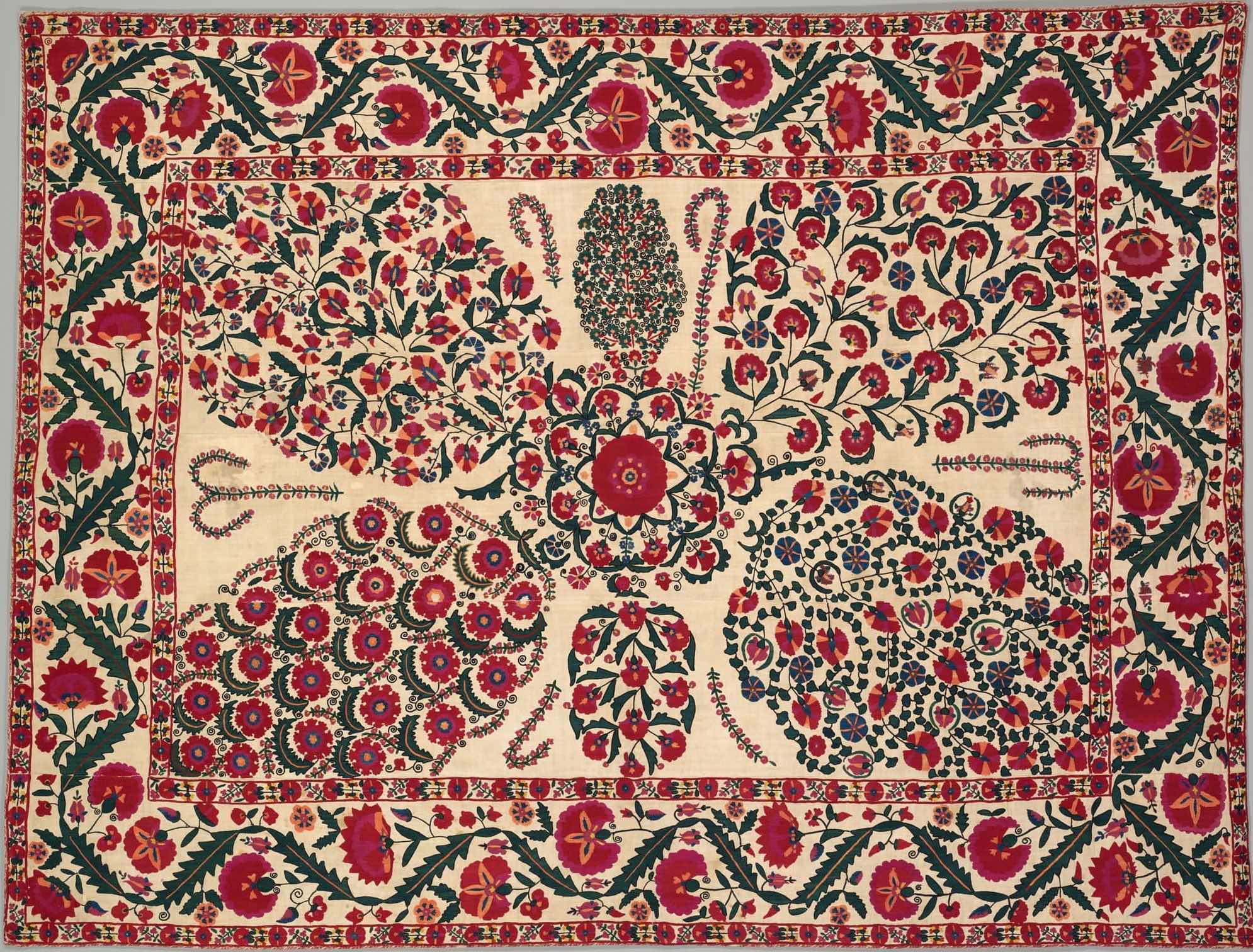 The important symbolic role that suzanis play in the years leading up to a wedding alongside the marriage itself, means that they have always been an important aspect of the domestic and social fabric of many Central Asian regions.  Yet while these communities are united in the importance they attribute to this textile, their differing locations largely within Uzbekistan, have resulted in regional stylistic variations of the suzani throughout the years.

These divergences can be seen in comparing the embroideries of the Emirate of Bukhara with those of the Khanate of Kokand, both of which exhibit influences that are thought to come from different Indian design sources. 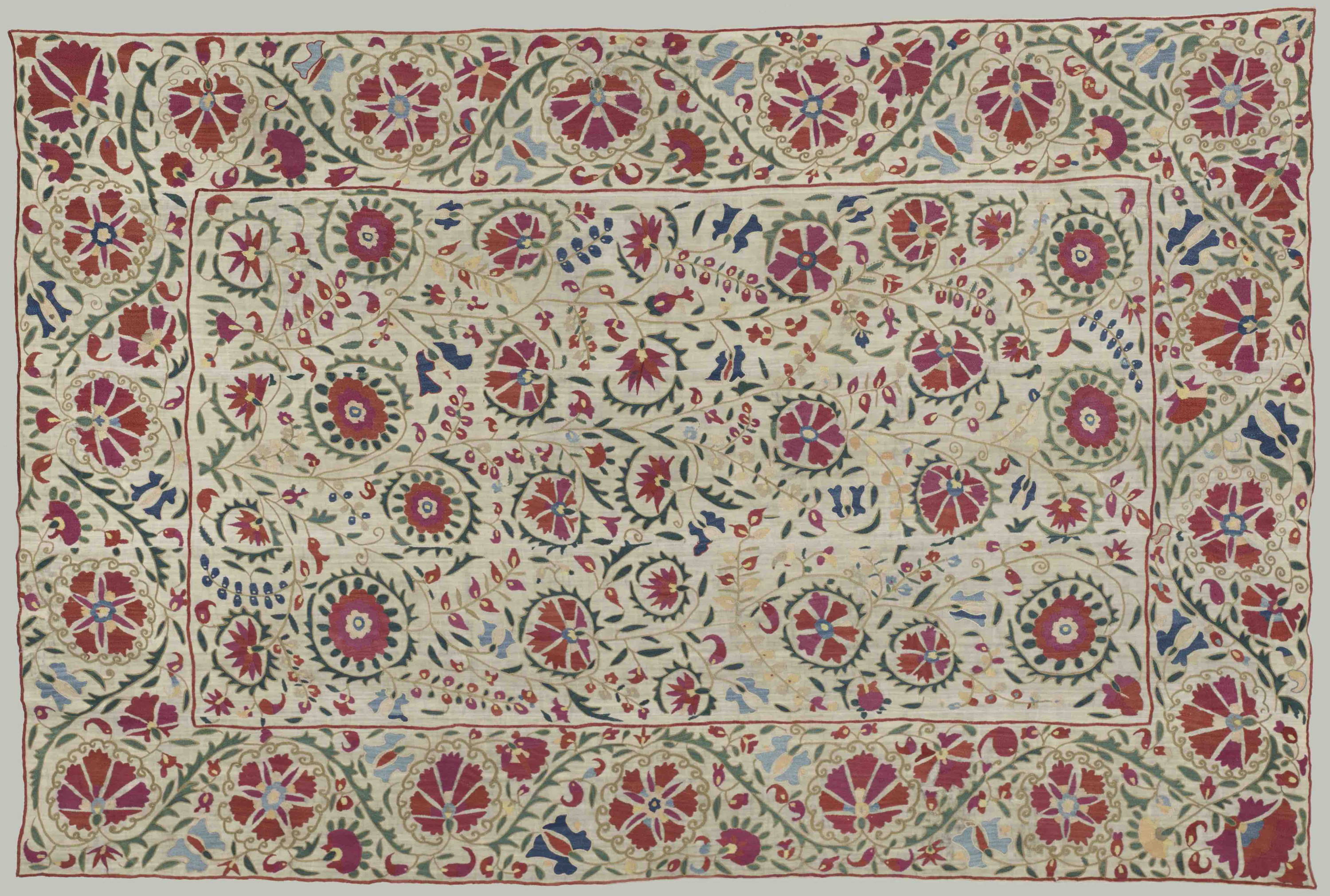 Wealthy Bukhara families were frequently exposed to woven imported Kashmir shawls, and they drew inspiration from these designs. They would, for example, adopt and adapt the boteh motif used in these shawls, such as by depicting flowers with slightly curved tips (above). Meanwhile, the suzanis that were produced by the Kokand exhibited Mughal influences.

Here the use of motifs, such as swinging red flowers (below), recalls the nodding flower motif seen in Mughal designs. Variances in suzani designs are therefore testament to the rich and complex history surrounding these textiles. 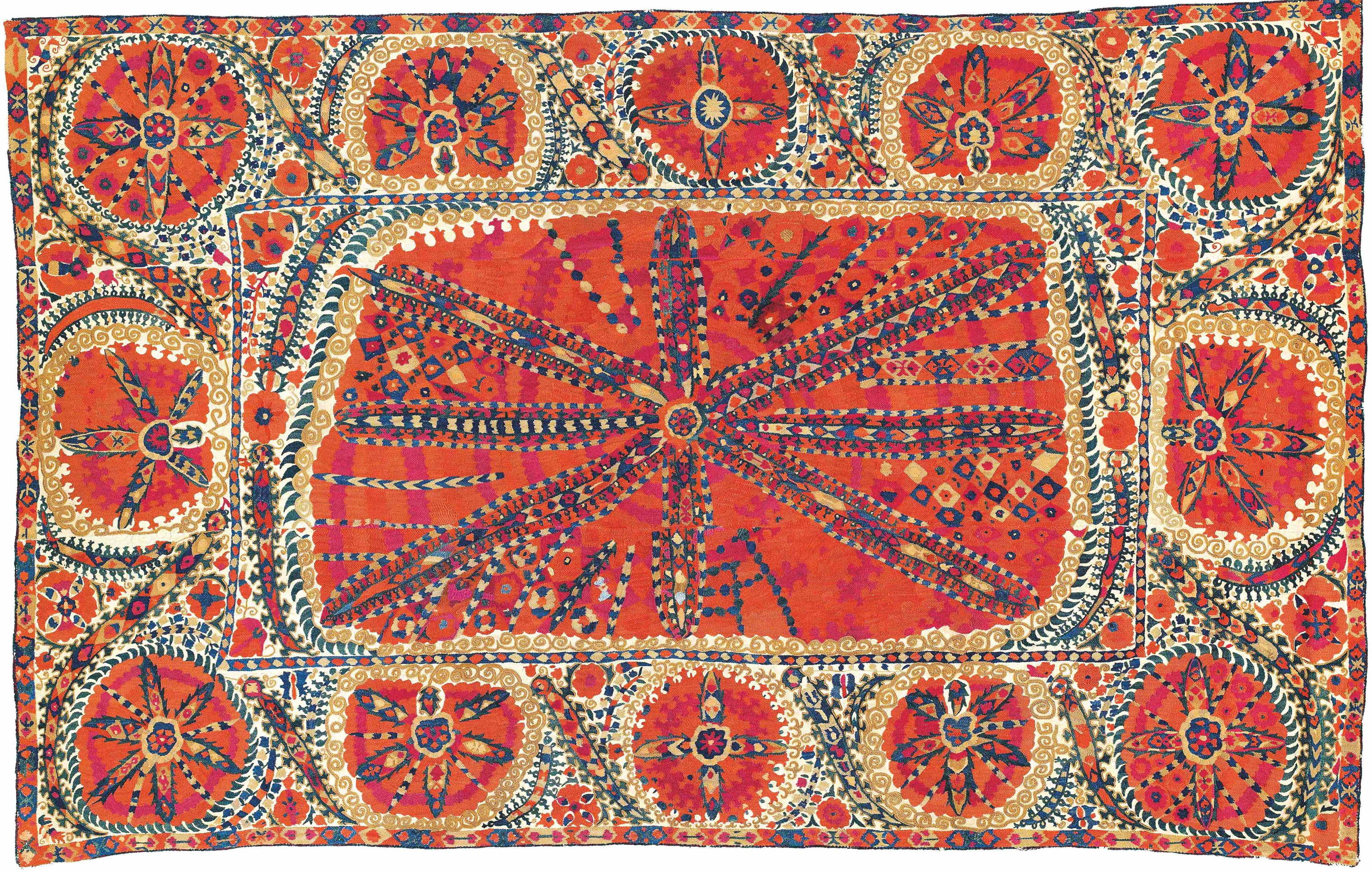