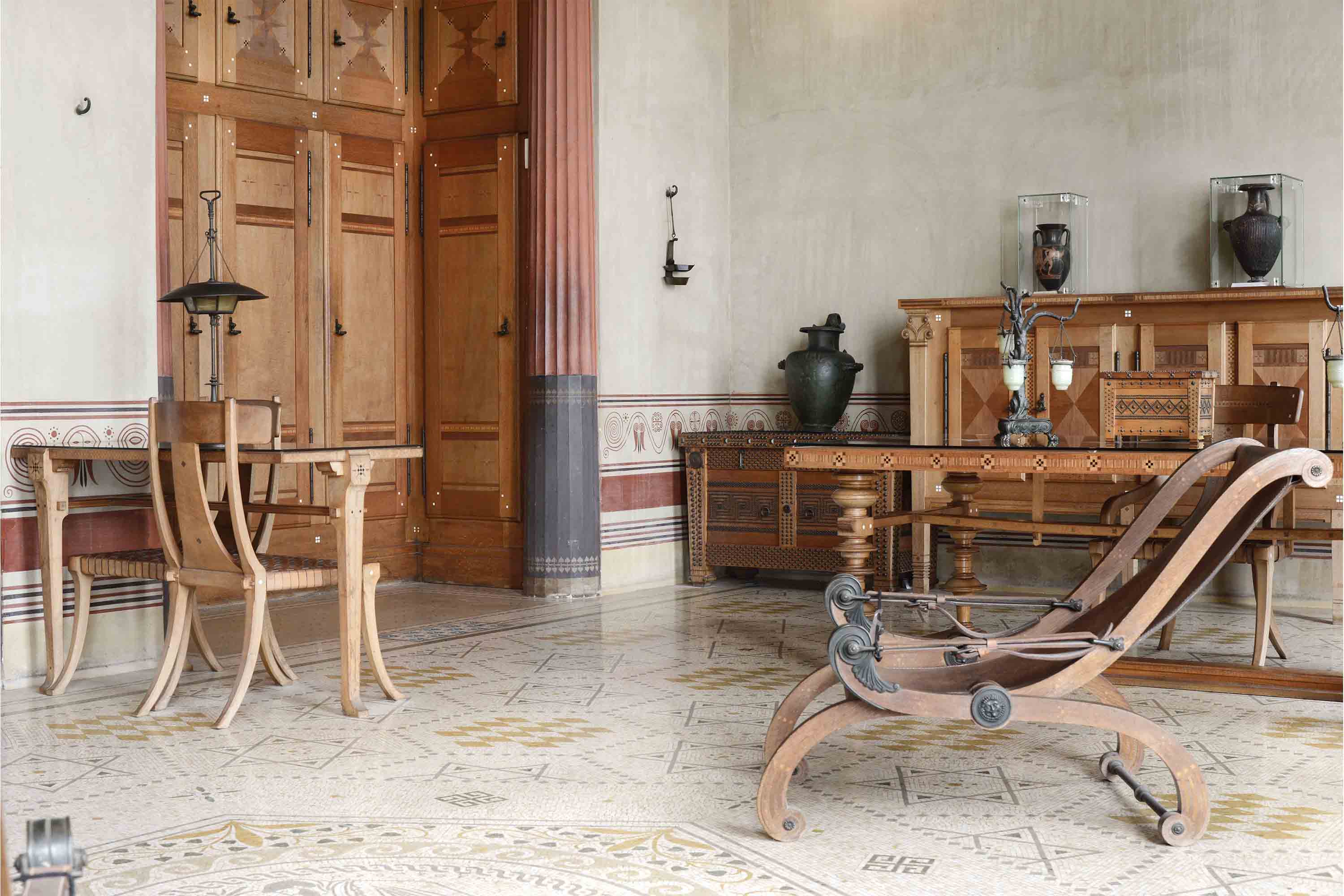 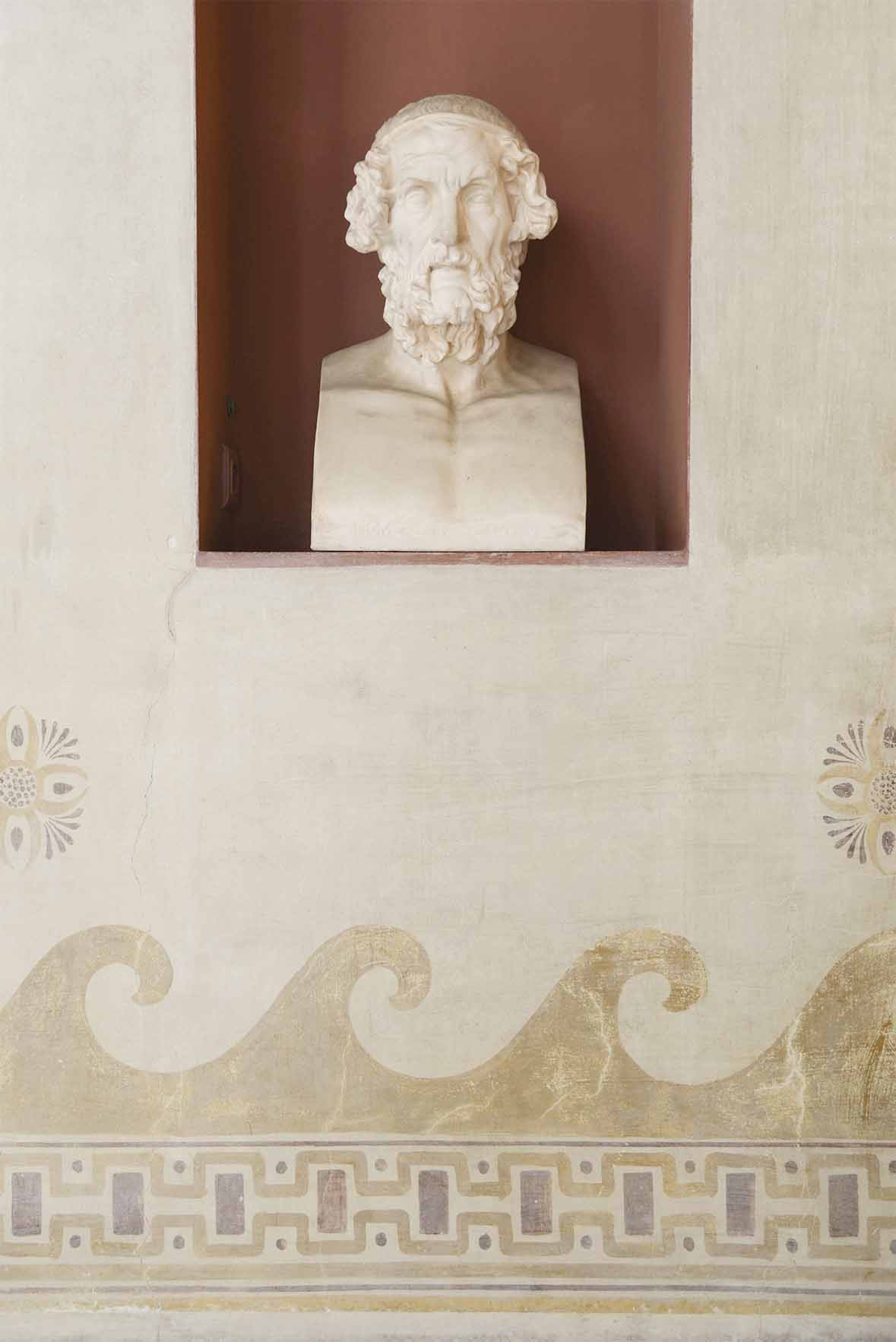 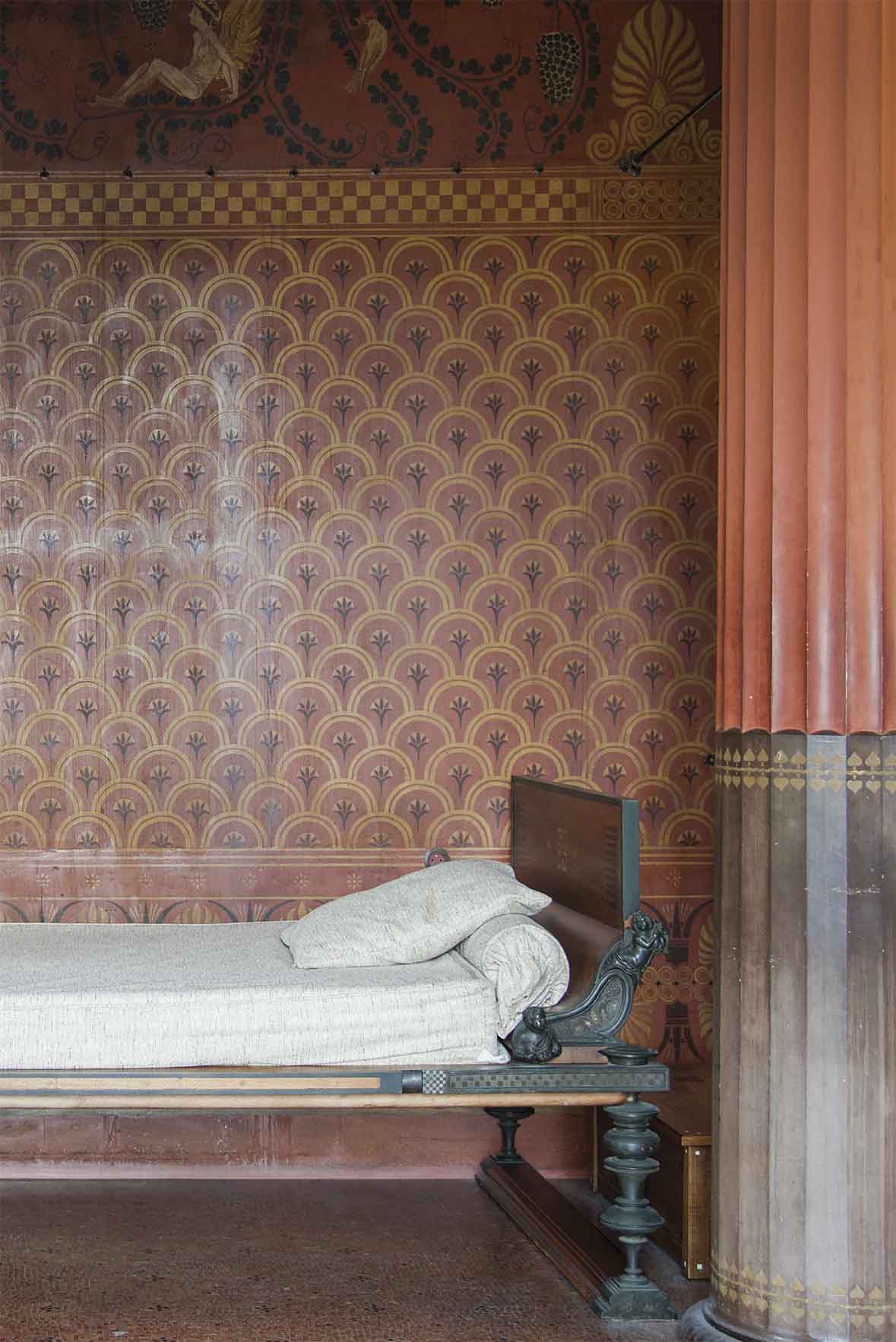 Steven Adams introduces the stunning Villa Kerylos, a house of immense beauty, innovation and richness presented through with an archaeologist’s level of attention and detail to summoning the decorative arts of the ancient world.

Nestled between Nice and Monaco in the Riviera village of Beaulieu sur Mer, the elegant Villa Kerylos is an ode to the sea as imagined through the aesthetic of Ancient Greece. This magnificent jewel, perched on the edge of the shimmering Côte d’Azur,has served as an inspiration to many, including a Rothschild, and continues to capture the world’s imagination, drawing thousands of visitors every year who come to experience the creation of archaeologist and renaissance man Théodore Reinach.

Théodore Reinach was a mathematician, lawyer, papyrologist, philologist, historian, numismatist (specialist in coins), musicologist, professor and politician; and his passion for Greek antiquity made him one of the leading Hellenists of the Belle Epoque. Reinach was also heir to a banking fortune and spent his inheritance living in exotic magnificence, eventually collaborating with architect and fellow Hellenist Emmanuel Pontremoli on a villa for his family. Much more than the caprice of a self-indulgent rich man, the Villa Kerylos is Reinach’s attempt to embody the ancient Greek values of democracy through design and architecture. 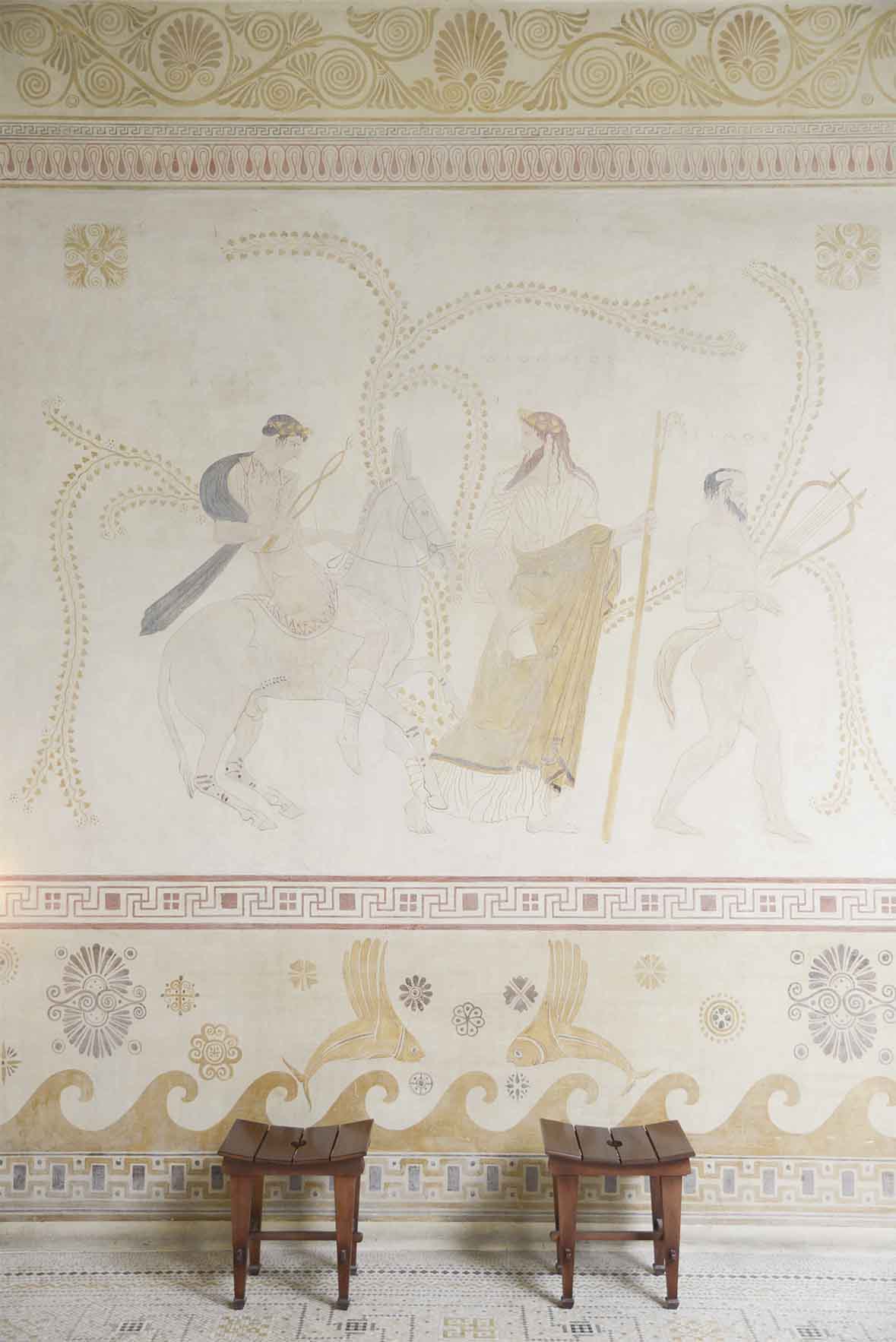 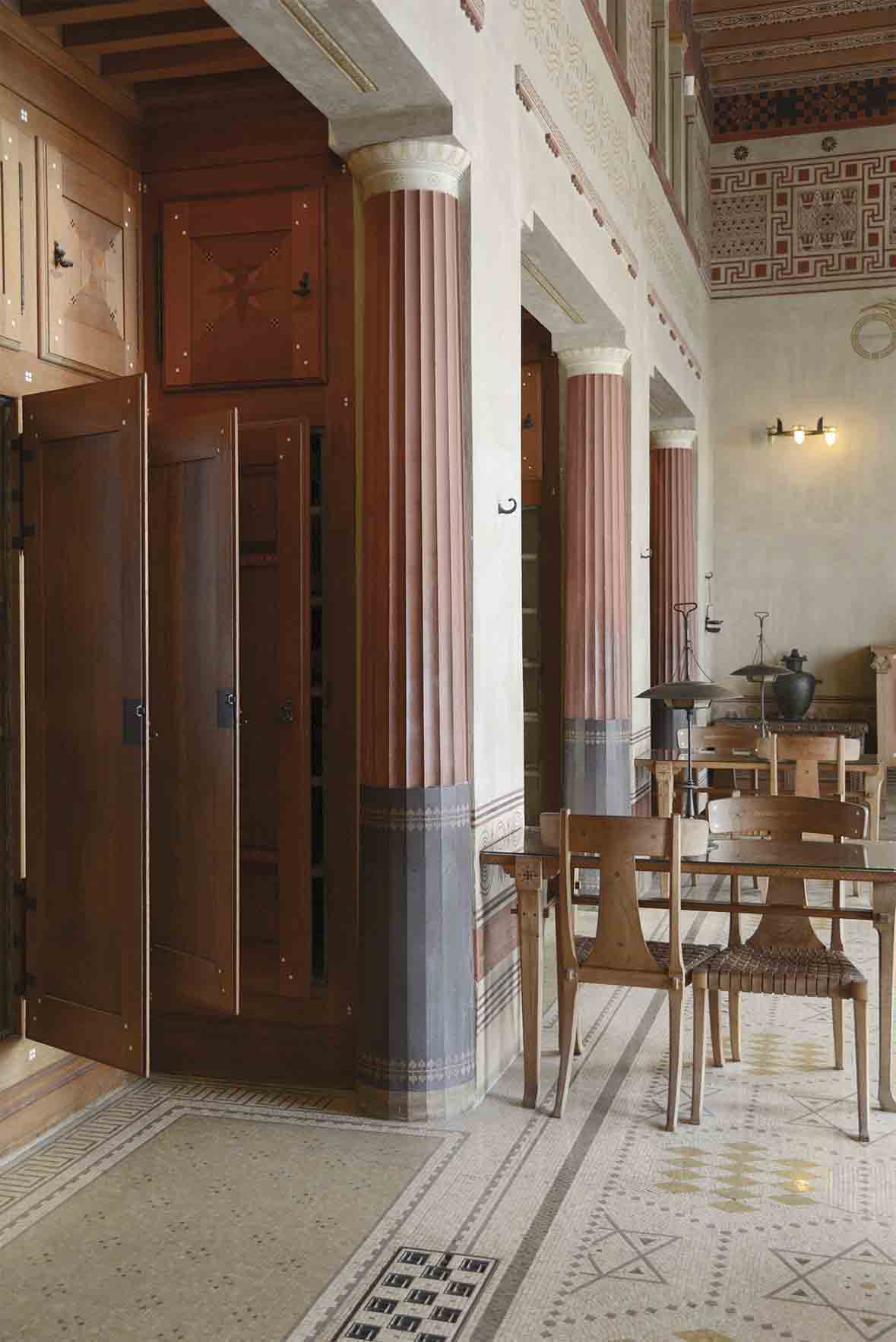 Beginning in 1900, it took eight years to complete the villa, which was closely modelled on the noble houses of Delos in the 2nd century BCE. While Reinach and Pontremoli referred to the past so closely that electrical fixtures were disguised as oil lamps, they also employed the most modern construction elements available at the time, including the most modern plumbing and underfloor heating. The building’s materials are lavish with the walls featuring three types of Tuscan marble: ochre Siena, Mauve Fleur de Pecher and gray-white Carrara combined in elegant and stunning combinations. Organized around a classical central courtyard, the villa’s rooms emanate restraint and subtle wit, and almost each one has a sea view.

They feature historically accurate mosaics, murals and are furnished with replicas of Greek, Roman and Egyptian pieces. The furniture was designed by architect Emmanuel Pontremoli and built by cabinetmaker Louis-François Bettenfeld. This minute attention to period detail could have easily become academic or museum-like in lesser hands but the sum total of this collaboration is magical and inviting.

Reinach’s second wife was Fanny Ephrussi Kann, whose mother was a member of the vastly wealthy Ephrussi family. Her cousin Maurice was married to Béatrice de Rothschild. Maurice and Beatrice were so inspired by Villa Kérylos that they built the nearby Villa Ephrussi de Rothschild. Though the Reinach’s lifestyle was extraordinary and rarified, the entire family were highly educated intellectuals and activists. They were Jewish and publicly battled against the growing French anti-Semitism of the Belle Epoque, including the Dreyfus Affair.

Reinach became a member of the Institut de France, bequeathing the villa and its contents to the Institut upon his death in 1928. His son Léon and wife inhabited the villa until the German occupation of World War II when the villa was seized by the Nazis and the Reinachs and their children were sent to their deaths at Auschwitz. The villa’s paintings, books and construction records were lost during this tragic period. After the war other Reinach children and their descendants lived in the villa until 1968. Today the public enjoys the remarkable achievements of this extraordinary place as Theodore Reinach intended.